A Lesson In Perspective

Business Leadership
Visit us on LinkedInVisit us on TwitterVisit us on FacebookVisit us on InstagramVisit us on YouTube
Written by Tracey Hulick, Senior Loan Operations Manager

I recently took a vacation by myself to Northern Italy. I was really excited anticipating all the adventures, beautiful scenery, food, wine, and new friends. Of those, I was truly most excited about the people I’d meet.

During my research before the trip, I was told there would be ample English speakers and would likely encounter many other solo travelers along the way. I figured my odds of meeting other like-minded people would be a breeze!

Now don’t get me wrong; I loved this trip. The scenery was amazing. I had light conversation with some interesting people. And I had phenomenal food and wine. But the language barrier proved to be much harder to overcome than I anticipated.

Thankfully I had a 500+ page book with me to give me a daily dose of English. I always like to read when I go on vacation and for this trip I chose Awaken The Giant Within by Tony Robbins. I hadn’t been exposed to his work previously, but thought it would be a good way to keep my mind active amongst the gluttony of white wine, gelato and sun bathing.

Near the end of my final week in Italy I was reading about emotional mastery.

Two days later I was sitting at my last dinner in Italy in a beautiful hotel. I’d spent the afternoon walking around the beaches of Chioggia, sipping Fanta, smiling and saying “buongiorno” to anyone who made eye contact with me.

One older man said something I imagine was a compliment in Italian, and an elderly woman smiled sweet 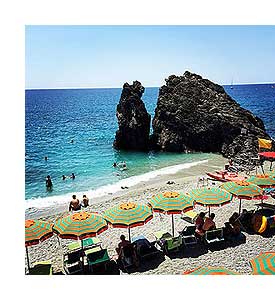 ly, but beyond that I was an island. At dinner, my waiter spoke a little English but was far from warm and friendly. All I wanted was a connection with someone after what felt like a very isolated last day! Then I thought back to what I’d read in my book.

I was feeling lonely and frustrated. But instead of staying entrenched in those feelings, I decided to choose differently, and look at the situation with a different perspective.

So here’s what happened next: A family of 3 sat at the table next to me. They were speaking English with the waiter as well. While watching him with a fresh set of eyes I began to see that he wasn’t impolite…he was nervous!

He was fumbling with his language and his hands were even jittery. I couldn’t believe it. I’d been sitting there thinking this guy was rude when, in reality, he was just uncomfortable! I’d been so focused on myself and my feelings that it didn’t occur to me to think about it from his perspective.

A few minutes later he brought the first course out to the neighboring table and I caught his attention as he turned around. He stopped mid-step, eyes wide, and seemed to not even be breathing. I asked “Are you OK?” He still was frozen.

Then I said “Your English is really good. Thanks so much for your effort to speak it with me. It helped a lot.” With that he exhaled, his shoulders dropped away from his ears, and he got a big sincere smile on his face. He looked right at me, said “Thank you so much”, and then smiled his way back to the kitchen.

Shortly after, he came by again with a continued grin and a dessert for me, and said “Thank you so much for…(he drew a circle around the whole table I was sitting at)…all of this. It made my night so much better.”

I only wish I had forced the perspective shift earlier in my trip. So often our interpretation of a situation isn’t accurate, but we never know that unless we practice seeing something with new eyes. It could be an interaction with a stranger, friend, family member, or co-worker.

I may not have brought home a list of new contacts from Italy, but I did bring home one thing that I will cherish forever….

Tracey Hulick joined First Business as a Loan Operations Manager in August of 2012; prior to that she worked for nine years at Park Bank in the Commercial Processing and Loan Servicing areas.

Reflecting on Raising $521,800 for Community Charities

Question: What is 12 years old, has only celebrated 9 birthdays, has survived two recessions and a pandemic, and has

Attracting Talent with Equity In Your Business

It’s no surprise that employers are having challenges finding employees in 2021 and it doesn’t appear to be industry specific.

Building Your Skills in Changing Times

Recently, some of my coworkers at First Business Bank dove headfirst into the podcast pool and I’ve been enjoying their