Have you ever found yourself in the midst of an incredibly intense moment where suddenly everything clicks and you have total clarity? I found myself in this exact moment at 12:15pm, Sunday, July 26th.

I had impulsively set up a reservation to skydive for the first time just two days prior at Skydive Midwest. This surprised a lot of my friends because just 5 short years ago I was the person who didn’t like to go above the fourth rung on a ladder!

There I was, anxiously standing in the hangar with my instructor, Ruan, fastening all the loops and buckles on my harness. He was telling me what to expect during the jump. I felt excited and I wasn’t particularly nervous at this point.

I could hear other first-time jumpers around me voicing their worry over the parachute not opening, the plane going down, the harness not holding tight enough, etc. I did my best to relax, put my trust in Ruan, and focused on the experience.

Before I knew it I was at 14,000 feet, walking toward the open door of the plane. The cold air was invigorating, the view of Lake Michigan was breathtaking, and I paused for a moment to acknowledge that I was about to experience the biggest rush of my life…and to make sure to savor every second. This moment was so clear and peaceful, and yet I felt like electricity was flowing through my veins. 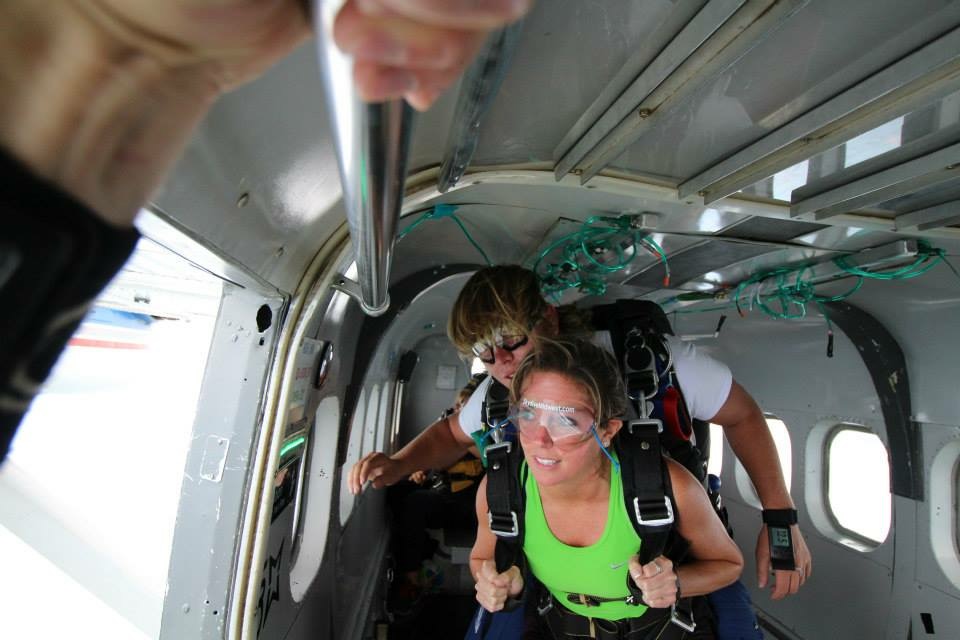 One, two, THREE - we were out the door in our freefall! My calm peace of mind quickly turned to panic when I could no longer feel Ruan on my back since we were both weightless and plummeting at 120 miles per hour!

Thankfully, in a few seconds, my photographer Paul positioned himself in front of me. Needless to say, I was comforted to see him there. I regained my wits, reminded myself to enjoy the thrilling experience instead of worrying, and trusted that Ruan would take care of everything.

There was literally nothing I could do but enjoy the fall.

Our 60-second freefall quickly led to the parachute opening, followed by a smooth navigation to our eventual landing. Once my two feet were planted firmly on the ground, I was nothing short of exhilarated!

It wasn’t until I was reflecting on the experience in the car on the way home that I realized something.  A concept I had read about and taught to my staff last year was the reason I was able to let go and embrace my jump.

I, on the other hand, was standing in my Circle of Influence – focusing on the experience, relaxing, being present, and trusting Ruan to do his job.

The most impactful aspect of this skydive has been the sense of peace I had about it, and the absolute liberation I felt as I stepped out the door of that plane. I knew that there was absolutely nothing I could control even if I wanted to, so I just let go and surrendered to the experience. I had never felt so free!

It can be easy to focus on those things you desperately want to control. Your co-worker, your child, the weather, the way other people drive, etc.  You can focus endlessly on those types of things, but the reality is that you can’t control anyone or anything. You can only control yourself.

I knew the lesson Stephen Covey taught made sense and was true, but it wasn’t until I was 14,000 feet up, about to cross an item off my bucket list, that the magnitude of that message gave me a clarity I’d never had before.

Tracey Hulick joined First Business as a Loan Operations Manager in August of 2012; prior to that she worked for nine years at Park Bank in the Commercial Processing and Loan Servicing areas.

Derek Smith: From IT Support to Cybersecurity Expert

At First Business Bank, it’s easy to see how talented professionals stay here for their entire careers. With many opportunities

Helping organizations and businesses improve efficiency, reduce costs, and increase security is the ongoing mission behind just about everything we

Reflecting on Raising $521,800 for Community Charities

Question: What is 12 years old, has only celebrated 9 birthdays, has survived two recessions and a pandemic, and has