Quite a while ago I wrote a blog called "I can't get no satisfaction." However, the one time I could count on satisfaction was when we did our annual client survey. Our scores were always very high. We used a 5-point Likert scale, with four and five being satisfied and very satisfied, respectively, and historically ~95% of our clients rated themselves a four or five.

Maybe it was because I and others in management felt so good about those scores, or the fact that we had been measuring client satisfaction that way since the 1990s (“that’s the way we’ve always done it”)? But we were reluctant to change to using Net Promoter Score, or “NPS,” even though we were encouraged to do so by a few of our board members for a couple of years before we made that part of our process.

In case you are not familiar, NPS is widely used and differs a bit from the way we traditionally measured satisfaction in that you subtract the number of detractors from your promoters. Measured on a 10- point scale, NPS is calculated by subtracting the lower scores, one through six, from the total on the high end, nine and ten, to get a "net" score.

I have become convinced this is a superior way to measure, as it very much differentiates those highly satisfied fans, or “promoters,” from that middle range. It also penalizes you for having “detractors.” This also makes sense, as older studies showed that while a satisfied customer will typically tell someone, a dissatisfied customer will tell 9-10 people — and that was before social media! So, taking these detractors into account and separating them from the larger neutral group is critical. I might argue that you should weight each detractor’s vote even more heavily, but hey, I didn’t invent this!

Consequently, and very interestingly, because of that a company can actually get a negative NPS score. A few notorious industries — tv/internet service providers, airlines, and car rental companies (maybe because they know how to take the reservation, but they don’t know how hold the reservation?) – run close to zero. So, it's a little scary to convert to an NPS rating when you've been getting extremely high "satisfaction” ratings. But, it's a more meaningful measure that can be compared on a relative basis to more companies, and across more industries.

One other thing we've used our client survey for is to get specific feedback. We also ask about satisfaction relative to certain products or services, so we know what we need to work on. That's one aspect of striving for continuous improvement, but the other is improving through innovation. In that regard, we ask open-ended questions that allow clients to make comments or suggestions that may lead us to consider a new service, product, or delivery channel. 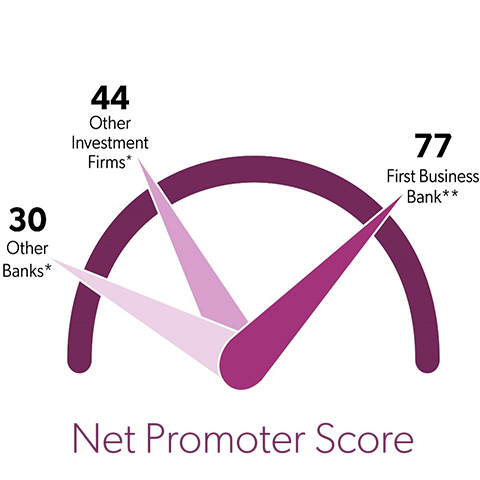 We recently conducted our annual survey – key point here, if you want good data, make sure the data is gathered through a third party in an anonymous way – and the results are in! I’m proud to say that our overall score improved from 76 to 77, quite a bit higher than the median NPS* for financial services and banking, which are 44 and 30, respectively.

If your business wants to understand how your customers really feel about you, consider an anonymous survey using NPS. Unless, like Jack Nicholson told Tom Cruise in A Few Good Men: “You can’t handle the truth!”

Corey Chambas has worked in the commercial banking industry for over 35 years, specializing in commercial lending and cash management.

When All Stars Align: Whoever Builds The Best Team Wins

LeBron James, Dwyane Wade, and Chris Bosh. Whoever has the best team wins. Whether its basketball or business, it’s always

While the number of business formations may begin to slow down after a two-year high, any business banker in Southeast