Are You Planting Trees? 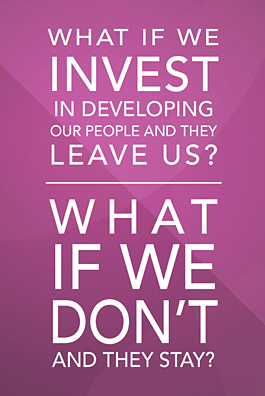 I marvel at old trees. Especially the giant oaks we have around the Madison area. I’m lucky because I get to see them in the country when I’m out biking and also when I’m walking around town. I understand that trees grow naturally out in the woods where I bike, but in the city someone likely planted them. They obviously were taking a long view of things, planting a tiny sapling that would mature long after they were gone. Some people do that when they move into a new house, envisioning a big shade tree thinking just maybe they’ll live there long enough to see it mature (we’ve been in our house over 26 years now – so it can happen!). It’s work now that will only pay off in the long run.

It’s the same when it comes to investing in your employees. For a long term payback, it is critical to invest in training and development in the short run. I’m not talking about sending someone who works with spreadsheets a lot to Excel training - that’s simply for near term payback via increased productivity. I’m talking about investing in the development of high-potential future leaders. The payback in this case may not be for many years down the line.

Often times the actual area to focus that development on can be counter intuitive. It may even be having someone work on developing a skill or ability that they can’t even put into practice right now. It’s not sales training for a great sales person who might someday be a sales leader - it’s more likely focused around something like people management or leadership. Using an assessment tool and 360’s can help determine what these gaps might be.

Development can be done with offsite seminars or classes, but as an organization grows, at some point you can bring some of this in-house. Three years ago, First Business reached a point where we hired a Director of Talent Development to proactively focus on training and development across the organization. But that’s only part of the investment, as all managers and senior leaders have to be heavily involved as well. I’ve often said a manager’s most important responsibility is to help their direct reports be successful. Therefore, we have also done significant training and education for that group so they have the background and tools to effectively work on development with their teams.  I believe this overall work around talent development is the most important activity going on right now at First Business as relates to ensuring our long term success.

Some of you reading this may be thinking, “What if after investing all that time and money in an employee, they decide to take a job elsewhere?” I was troubled by this thought when someone we had significantly invested in developing recently left our organization. But then I quickly thought about this little exchange that I had seen before:

CFO asks CEO: “What happens if we invest in our people and then they leave us?”

CEO responds: “What happens if we don’t, and they stay?”

There are also two intersecting demographic forces that play into the current importance of this development issue. First, there’s the fact that after the tail end of the baby boom (which I’m part of) there are just fewer people and therefore less talent to fill leadership roles that will be opening. So since there are fewer 35 to 50 year-olds to step into these positions, there will be a need to advance some from the millennial generation into leadership positions more quickly. This ties nicely in to the (sometimes criticized) desire of millennial’s to progress quickly in their careers. Another common knock on millennials is they need frequent feedback. Well, the only way someone can improve is if they are receptive to feedback and want to know what they need to do better. So both of these millennial “traits” may actually prove beneficial for the workforce in the long run.

I understand that real talent development is a significant investment, but if you are looking to perpetuate and grow your organization over the long term, you better be planting, watering and fertilizing now.

Corey Chambas has worked in the commercial banking industry for over 35 years, specializing in commercial lending and cash management.

Safe Online Shopping for the Holidays

As online holiday shopping skyrocketed over the past several years — an increase of 64.1% from 2019 to 2020 and

Insights From The 2022 Wisconsin Manufacturing Report

First Business Bank is proud to sponsor the Wisconsin Manufacturing Report™ again in 2022. The report was started last year